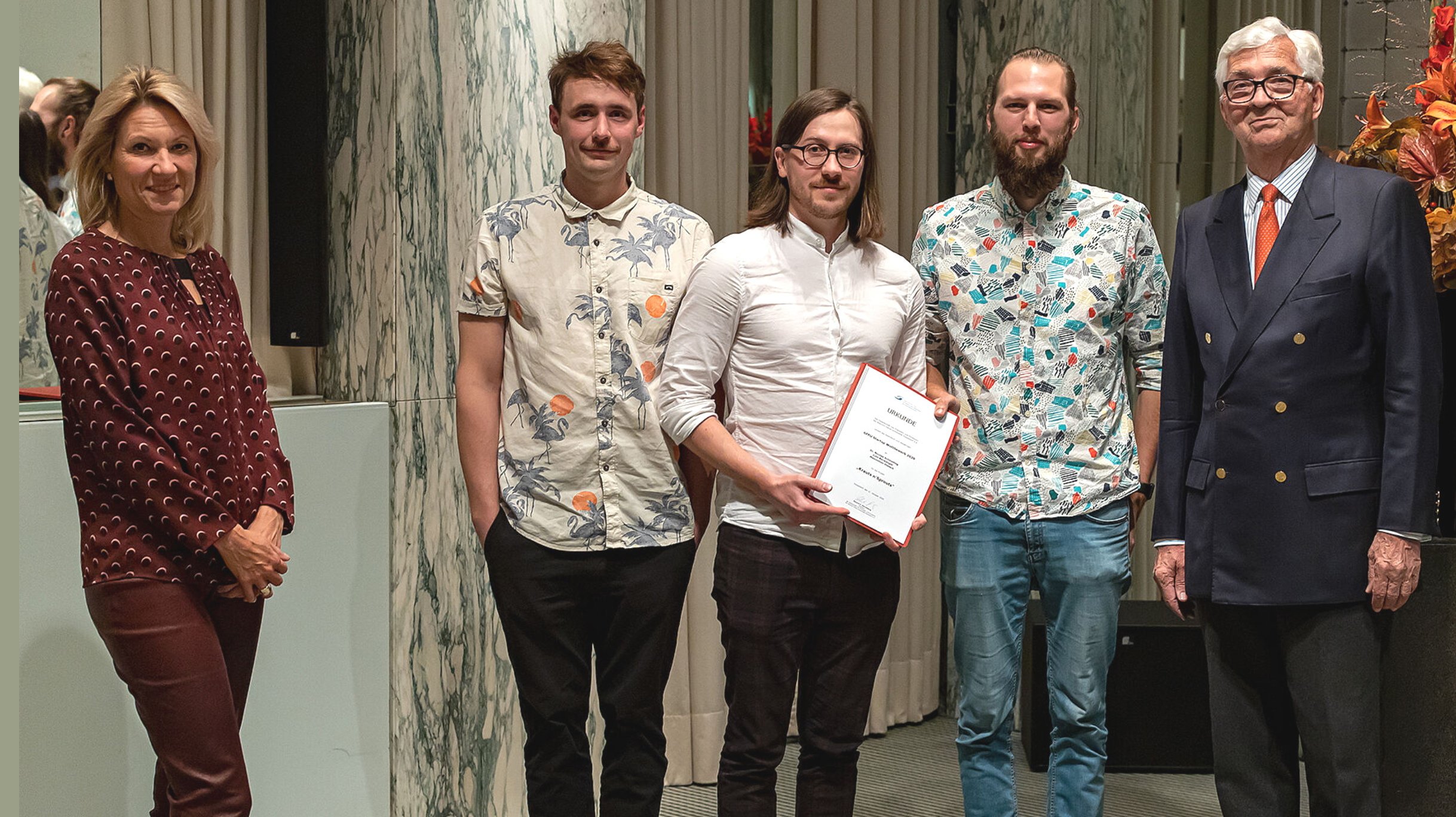 And the winning team is: “Krauts ‘n’ Sprouts”

On 21 October 2021, the Gesellschaft von Freunden und Förderern der HHU (GFFU) once again awarded its startup grant, which it has been offering since 2017. Due to restrictions brought about by the pandemic, the event had to go ahead with a much smaller audience. Only a few guests were able to experience the final presentations of three teams of young researchers “live” in the Industry Club.

Three research teams made it to the final round of the competition and presented their startup concepts to the audience and the panel of judges:

1. MyCare (Melina Dederichs, Karen Sagoe, Paul Isaris)
“MyCare” is aimed at employees in the healthcare sector: A special app allows them to measure their daily stress levels and then offers measures to combat this stress.

All three startup teams showcased very impressive business ideas, but only one could come out on top. After the presentations, the President of the GFFU, Eduard H. Dörrenberg, announced the winners – Krauts ‘n’ Sprouts. The team was delighted with the award and the prize money of €50,000.

As in previous years, the GFFU is presenting this award with the aim of helping promising young researchers embark on an entrepreneurial career. With the grant, the GFFU wants to inspire the entrepreneurial spirit at the HHU and strengthen Düsseldorf as a location for innovation and business. Eduard H. Dörrenberg confirmed that the GFFU will continue running the “startup competition” as a flagship project for entrepreneurship in the future.

About the GFFU
The Gesellschaft von Freunden und Förderern der Heinrich-Heine-Universität e.V. (GFFU) is the leading private institution for the promotion of science in the Düsseldorf region. Thanks to both its 24 foundations and its network of major public figures, the GFFU has become an important link between the university and the public ever since it was founded in 1955.

The patron, Honorary Senator of the HHU and Düsseldorf Citizen of Honour has turned 95 years old.

The GFFU congratulates the university’s Honorary Senator on his 95th birthday (born 26 May 1926 in Mülheim an der Ruhr). An in-depth profile honouring the long-standing patron and active supporter of the university, including details on his latest philanthropic commitments, can be found in this recent news article from HHU: "Honorary Senator Udo van Meeteren donates 95 grants"

There is one more point we would like to add to this: With the “Haus der Universität” foundation, overseen by the GFFU, van Meeteren (together with his wife Irmel van Meeteren and others) makes it possible for the facility of the same name to operate on Düsseldorf’s Schadowplatz, with over 750 events and 31,000 attendees per year (before the pandemic...)

The “Haus der Universität” is currently being embraced by the citizens of Düsseldorf as a place for scientific lectures and a bridge to the HHU. It is the university’s embassy in the heart of the city – a shining example of a “citizens’ university” offering a well-rounded education in “general studies”, which is also kindly supported by van Meeteren.